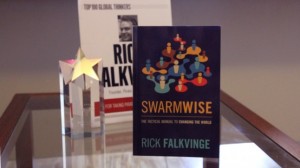 Screw Democracy. We’re On a Mission From God!” How can you resist a title like that? Welcome to chapter 6 of Swarmwise by Rick Falkvinge, grand poobah of the Pirate movement world wide. Of course, this book is available for free on line. (Pirates share!) I read the first 5 chapters on my smart phone. Chapter 6 will be available (along with the first 5 chapters) at falkvinge.net July 1st.  But if you prefer a copy made of trees, you can buy yourself one of those, too, and perhaps give it to one of your technophobic friends. The book will be coming out August 1st. The understanding of the way the Swarm works may be what drives your paranoid pals to join in to social media at last. And screw the NSA and their band of peeping toms, if you want to get amazing things done with few people and nearly zero money, social media is the way to go.

Yesterday I as I moderated a panel on how to organize for political ends at PirateCon 2013, I marveled at how much what Evan Greer and Gregg Housh and Veronique Vermorel had to say that was reinforced by what I read in Falkvinge’s work. He shares his work on line because he understands and respects that we all stand on the shoulders of those who came before us, we all discover good uses for new inventions at about the same pace, we all rework the ideas of those who came before us at about the same time. Falkvinge talks about a Swarm, Gregg Housh talks about a “Do-ocracy”, but both names describe the process of just *letting* people do what they can, (with some direction), not about telling people what they *must* do. And directing people with your passion and your vision rather than with specific, controlled directives works MAGIC. Veronique was able to garner 2.5 of the vote from all the French speaking voters in North America with no money and only three people. They have to be the right people, though, and you have to learn where to find them.

You *don’t* find them sitting at home watching the *news*. The corporate media will direct you to supplicate at the feet of the master’s servants, the Republicrat army, the same army those corporate interests *own*, that chokes and suffocates democracy in this nation. You find the people you need to change the world on social media, in chat rooms, and on the streets.

For example, because I *live* on Facebook, (associating there with fellow Pirates) I saw several posts about Cameron D’Ambrosio*, the young Metheun man arrested for terrorism and held on a million dollars bail for posting rap lyrics on Facebook. Because I had been on the street marching (in the rain, I might add!) against the monster that is Monsanto, I had become acquainted with another Pirate, Garret Kirkland, at last who was, that evening, having a discussion on Facebook about the plight of “Cammy Dee”. I suggested we pack the next hearing with supporters. Garret knew *exactly* who to reach out to, including local alternative media, and a rag-tag group of activists evolved. My idea would have gone NOWHERE if I hadn’t connected with Garret that day. Because I was at the hearing, I knew the family had lost their only computer when it was seized as evidence, and the Pirates were able to step up and offer them a refurbished one, so that they could get back on line, the place you need to be to know what is actually going on in the world. (Once their boy was arrested for TERRORISM of all things, the D’Ambrosios quickly learned how little the “news” reports on what is important to them personally!)

When the grand jury returned no bill, Cam was released just days after his probable cause hearing was delayed (for very pathetic reasons.) Nothing can stop the prosecution from submitting the same charges to another grand jury, though… nothing except knowing that a vocal minority of activists were behind Cam and his family and were ready to tell anyone who would listen about the insanity of this case. Next the Swarm has moved on to raising money to pay for this very expensive legal fight, and Chance Scafidi put up his own money to cover the cost of the hall for the upcoming fundraiser July 6th. The magic of the Swarm, is *it* finds the people who are willing and able to step up, take risks, do magic. The March Against Monsanto was the 25th. All charges against Cam were dropped, the family was back on line, and the fundraiser was organized by June 27th. 33 days of Swarming did amazing things. And this was tiny compared to what *can* be done. The more people understand the Swarm the more magic can happen.

And, as awful as this experience was for Cam and his family, they now have allies they never would have met, and, so do I and everyone else who got involved. Making lemons into mile high lemon-merengue pie, is what can happen and does happen, when you use the magic of the Swarm. We *can* change the world with the Swarm, and we will.

If you read it, they will come! Get to it.