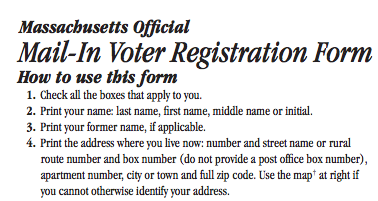 Back in November the Massachusetts House has passed a bill that would bring voting into the 21st century.  The two major improvements are early voting and online voter registration.

Early voting is a feature that other states have and will make it easier for busy citizens to vote.  As Pirates, it isn’t hard to see that allowing citizens to register to vote online is a significant improvement.

The bill is now before the Massachusetts Senate and will be voted on this Thursday.  Please use this Mass. ACLU page to find your State Senator and tell him or her to support it!

While you are at it, please go tell your Mass. House Rep. and State Senator to support Instant Runoff Voting (IRV).  IRV would ensure that the winning candidate in any election has to get a majority of the vote, even when there are three or more candidates on the ballot.  It is a 20th century election reform we badly need.

Thanks to the Election Modernization Coalition for their efforts in getting this bill so far.  Lets help them make it law!