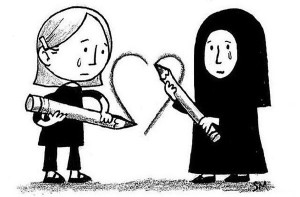 Statement from the French Pirate Party on the attacks in Paris on Friday the 13th: Si vis pacem, para pacem. Based on the English translation with slight grammar changes for American English. Image found via the Pirate Party Dortmund.

If you want peace, prepare for peace

November the 13th, cowardice and bigotry have bloodied the streets of Paris and our indignation is huge. Our thoughts are with the victims and their relatives. These lives, cut, broken, nothing will bring them back to us.

But now what? Here is our proposition in one sentence: If you want peace, prepare for peace.

Don’t charge us with being angels – a fashionable accusation. Without a doubt we must destroy Daesh, for the same reason it is necessary to treat the symptoms of a serious illness at the same time we apply a basic treatment. But make no mistake: the elimination of the caliphate won’t bring us any more safety than the one of Bin Laden if a serious work is not undertaken to heal the true causes of this tragedy.

Prepare for peace, it means stop encouraging war. Martial posturing of Valls, Sarkozy or any Le Pen exacerbate hatred at the same time they obscure the real issues. For decades, the Western powers – especially France – produce and export huge quantities of military equipment. The engaged armies in the Middle-East or Africa support private interests at a far distance from the objectives set for the defense of the human rights and democracy. This must stop. The West, France, should urgently take the path of solidarity, civil construction and distribution of wealth for the common good.

Prepare for peace, it means support freedom and not try to further reduce it as the system’s players are doing with the same cynicism that prevailed in January. Tens of repressive laws voted last years have further demonstrated their ineffectiveness. Rather than abandon itself into a population control fantasy by useless and expensive black boxes, the state would do better to focus on more and better trained staff able to act protecting what a democracy has most precious: the lives of citizens and their freedoms.

Prepare for peace, it means fight violence. International violence against the most vulnerable people than ours and subjected to a post-colonial dictatorship. Violence within our borders, exercised against those excluded from the system, more and more numerous, more and more marginalized. The criminals of November the 13th must be put out of harm’s way. But every citizen must examine himself/herself on the missed rendezvous and geopolitical cowardice of our democracies that have brought this world to the dramatic situation which we see.

Our emotion is huge, but more than ever we must keep a cool head. In politics, as in medicine, it does not accomplish anything if we don’t pose a good diagnosis.

1 comment on “If you want peace, prepare for peace”

The Mass. Pirate Party bi-weekly member meeting is every other Thursday at 9pm, Eastern time. Join the video meeting. Check on the upcoming meeting agendas.