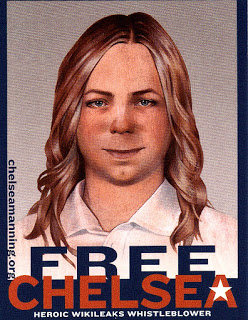 Imprisoned in 2010 and held for months under torturous conditions, Chelsea Manning was sentenced to 35 years in August 2013 for releasing many military secrets about US crimes in the wars in Iraq and Afghanistan among other things. If this stands, she’ll be out in 2045. We cannot let this happen!

In honor of Chelsea Manning’s 28th birthday (December 17th) this December 19th 2015, long-time supporters of freedom for Chelsea Manning will join the weekly Saturday vigil at Park Street organized by the Committee for Peace and Human Rights (StopAllWars.com.) We invite you to join us December 19th and sign a petition for a presidential pardon.

Supporters outside Boston are also encouraged to organize an event in their area, and The Chelsea Manning Support Network and Payday Men’s Network and Queer Strike will publicize it. Write to http://www.chelseamanning.org or payday(AT)paydaynet.org for more information and to share details of your event.

Posted in solidarity with the Committee for Peace and Human Rights